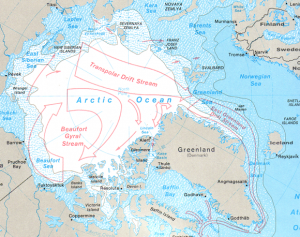 Linguistics has adopted the concept of “drift” from oceanography – as a description of incessant language change processes, which, like the ice drift, are characterized by the fact that certain parts of a language change in a circular fashion, some remain unchanged and sometimes even ‚counter-rotating‘ drifting movements occur in a language change process.
My intensive study of language has also changed my thinking about music and compositional techniques. Drift [I] is the attempt to transfer a linguistic phenomenon to music, respectively: to a musical instrument.
The piece works mainly with very slow, sometimes almost imperceptible and often superimposed processes of change. Thus, certain aspects of the instrument – such as the distance between two pitches, the distance between the bridge and fretboard – are being repeatedly strobed very slowly. The changes that result from the combination of these processes are observed as if viewed under a microscope. As an additional peculiarity, the player must slightly detune his instrument during the performance so that he himself feels more and more like on a drifting ice floe, because the action of the left hand does less and less deliver the notated pitches.
In addition to these slow processes, there are individual “jerky” events with greater density and external action, which sometimes prove to be the trigger of long-term developments, but sometimes also remain like foreign matter that doesn’t leave any mark on the broader surroundings – such as frozen flotsam in the ice or foreign words in a language.